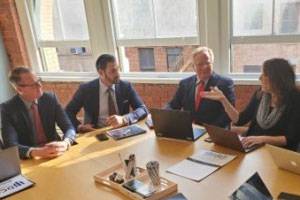 NEW YORK—(BUSINESS WIRE)—Dave Cantin Group (DCG), one of the world’s largest automotive dealership M&A firms, announced that 2019 was a record-breaking year in both closure rates and charitable giving.

“Because of our dual agent model, we’re able to consistently yield higher closing ratios, simplifying the process for owners who are ready to either transition into or out of the business.”

In 2019, the group had closure rates of over 90%, with the fourth quarter being the strongest of the year. Even with those impressive numbers George Pero, Vice President of Sales for DCG acquisitions, says the company was really building the momentum for closures in 2020. “We’ll be closing 10-12 deals in Q1 2020 alone, which is a record-breaking number for us,” he stated. “Because of our dual agent model, we’re able to consistently yield higher closing ratios, simplifying the process for owners who are ready to either transition into or out of the business.” The group’s closure rate for 2019 is a 20% increase over the previous year, and the firm expanded to represent dealerships in all 50 states.

Last year was also a record-breaking year in donations to charitable organizations. DCG is proud to donate a portion of DCG Acquisition’s revenues to charities dedicated to battling childhood cancer. In 2019, DCG donated $10,000 each to charities in the cities of the dealerships they represent, with the funds coming directly from DCG’s profits. “With the number of deals we were able to close in 2019, we are thrilled to have played such a huge part in fighting childhood cancer in each community,” says Dave Cantin, President and CEO of DCG. “This is a cause I am extremely passionate about. I have made it my mission to fight alongside children and their families on this difficult journey.” Cantin himself announced last October that he was cancer-free after five years of fighting the disease.

While 2019 was a record-smasher, Cantin believes that 2020 is shaping up to be another incredible year. “As the automotive industry continues to evolve, we are constantly learning and adapting to make the M&A process seamless for our clients,” he says. “Owners will still need to buy or sell their businesses, and it’s our job to make sure each transaction is handled with integrity and care.”